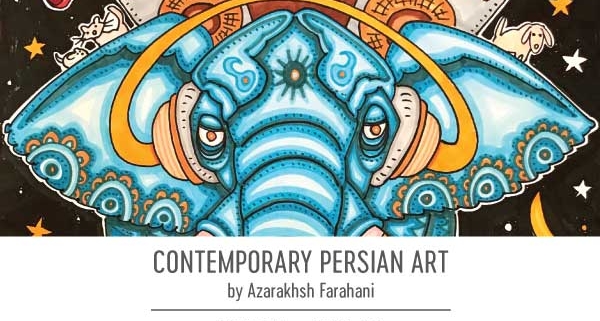 The prints, marker on paper, skirts most motifs of Islamic art to include a preponderance  of music, animals, extraterrestrials swimming in a background of sky all overseen by an omniscient eye—or in some cases, eyes. Each piece has a story to tell. Everybody’s Coffee is proud to present an exhibition of prints by Iranian artist Azarakhsh Farahani. June 7 – July 19 with an Opening Reception Friday, June 7, 6 – 8 PM. The opening reception will feature a video installation of Farahani’s illustrations animated by Paniz Rafieimehr.

We first met Azarakhsh Farahani when he came to Chicago to promote Malaria at the 2016 Chicago International Film Festival. As well as being a musician and actor, Farahani is an accomplished illustrator, who has created posters for festivals and film events. Despite miles and travel bans, Azarakhsh’s detailed and bold, colorful work speaks to us.

Just as Iran has always been at an international crossroad, its art has seen many influences through the ages. Perhaps at times belonging more to Central Asia than the “Middle East,” the art aesthetic in recent decades has made great use of abstract and non-representational elements. Farahani’s work is surprisingly expressive and personal, incorporating autobiographical details such as a microphone, an electric guitar, or a café table inviting us to sit down and enjoy a late-afternoon tea or coffee. Here is art uniquely Persian without cliché or political agenda.

Born in 1981, Azarakhsh is a musician, illustrator, and actor based in Tehran. The Farahani family is well-known in the theater world where his father and mother and sisters are all actors. He completed a B.A. of painting in Azad University of Tehran in 2005. He has been producing music for the last 16 years, and is the founder of Koochneshin band. Between 1996 and 1999, Azarakhsh Farahani was an experimental and professional cartoonist at several Iranian publishing companies including Abrar, Fath, Aftabgardan, Chista, Keyhan Karikator, Tanz-o-Karikator, Jelveye Honar, Soroosh-e-Nojavan, Ayandehsazan, and Aban, etc. In recent years, he has made illustrations for several books and event posters. He has had solo shows in San Francisco, Brussels, Paris, and Berlin to name a few. A show combined with videography at No.9, Fayazi (Fereshteh), Elahieh, Tehran just closed. You can find more at https://www.facebook.com/azarakhsh1 and at Instagram.

Though he will be unable to attend the opening, we will try to connect with Azarakhsh and invite him to comment on the pieces. Opening June 7, 6 – 8 PM, the show Contemporary Persian Art by Azarakhsh Farahani, runs through July 19. This summer on Monday nights the Wilson Abbey Film Group will host an Iranian cinema series. These will include films in which Farahani family members acted under the direction of some of Iranian cinema’s biggest names. For information on the films and series contact filmgroup@wilsonabbey.com. Everybody’s Coffee and Wilson Abbey is located at 935 W. Wilson Ave., Chicago.