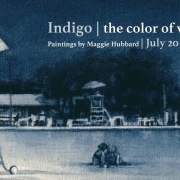 “Indigo | the color of whiteness”, a series of paintings by artist Maggie Hubbard, presents icons of the white middle class. These objects and scenes take on new meaning when solely depicted with indigo dye, an ancient pigment fraught with power, colonization, and slavery. Hubbard’s work asks two critical questions of our time: who is white and what does it mean to be white? “Indigo | the color of whiteness”, July 20 – August 29, will be on display at Everybody’s Coffee, 935 W. Wilson, Chicago.

The series grew out of a process of examination. “The paintings worked as a kind of journaling. With each painting I was processing the white culture that formed me and the ways in which whiteness influences society as a whole.”

For almost five millennia, in every culture and every major religion, indigo has been one of the world’s most valued pigments. No color has been prized so highly or for so long, or been at the center of such turbulent human encounters. Indigo was a cornerstone of the transatlantic slave trade — one of the hidden commodities, like cotton, sugar, salt, and gold…

Indigo: In Search of the Color That Seduced the World, Catherine E. McKinley

Indigo dye, historically a product associated with colonization and wealth, also worked as a way to express grief. Hubbard uses indigo dye almost as a blue lens of grief in order to re-vision and throw the mundane into contrast.

Maggie Hubbard is an artist from Chicago, IL and holds a BS in Illustration from Indiana Wesleyan University (2013). Her work has been featured in various exhibitions throughout the Midwest and Pacific Northwest. She is pursuing a Masters of Fine Art at the University of Illinois at Chicago this coming fall. More of her work can be found at www.maggiehubbard.net

An Opening Reception and artist dialogue with guests is scheduled for Friday, July 20. The show runs from July 20 – August 29. Everybody’s Coffee is located at 935. W. Wilson, Chicago.